It's hard to believe I'm writing another wrap-up.  It seems like the week just started and it passed so quickly!

I fulfilled my teaching duty at co-op on Monday, filling in for another teacher.  I enjoyed teaching the last two weeks but glad I'm not required to teach every single week.  I wasn't as prepared this week as I thought I was.  But it all worked out ok.

On Tuesday, we went to see a production of The Wizard of Oz at the Children's Theatre.  It was a fantastic play with an awesome set.  Emily and I decided that we would like to work on creating sets for playhouses.  How fun would that be?!! 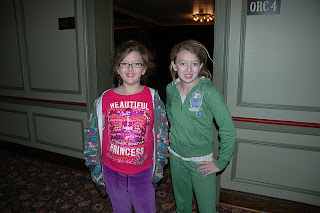 I had to snap some pictures on the walk back to the car... 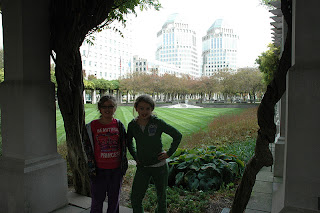 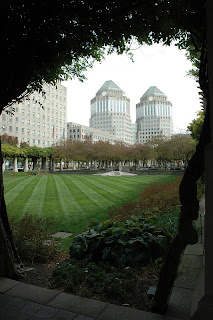 The week really wasn't the most productive.  Co-op on Monday, field trip on Tuesday, and I started feeling a bit sickly on Wednesday, so that slowed us down a bit.  I even skipped Bible study Thursday morning and took a nap.  I rarely take naps - only when I'm extremely tired or sick.  I'm feeling much better now though.

In My Father's World, Rome to the Reformation...

After the deaths of Antony & Cleopatra, the story in Augustus Caesar's World declined.  It's back to being a bit boring.  We briefly skimmed over reading about the Druids.  It was optional.  I wasn't against reading it in its entirety but really didn't see the need to.  I mostly just summarized the gist of it and explained it the best I could.

We didn't do any of the health lessons this week.  But it's ok because the kids are taking health at co-op.  We'll catch up on our stuff at home.

We collected some items to make more projects from the Roman World book.  Emily wants to make sandals and a clay animal rattle.  I'm going to help Katie make a clay doll.

Katie's reading is improving.  Some days are better than others and she doesn't get as frustrated.  This makes us all happier!  She is almost finished with her first grade workbook.  I told her that we would celebrate when she completes it. :)

Once she's done, we will continue reading her Bible Reader and I plan to start the McGuffey Readers.  Some of it will be phonics review and I plan to have both kids participate in those lessons because I think Emily could use a refresher.

We only did a couple of math lessons this week.  We did so many last week though, that it all balances.


I finally broke down Thursday and turned on the furnace.  It was only 64 degrees in the house and my nose was dripping.  I held off as long as I could!

On Friday, the kids and I made chicken noodle soup and tacos.  Odd combo, I know.  But with a picky eater, sometimes you just have to go with it.

Emily's first gymnastics meet of the season is this Saturday.  She was really nervous early this week but after her coach talked with her, she settled down.  I'm looking forward to watching her and the other girls compete.  I've got my Nook loaded so I'll have something to read during all the down time and Hubs has a demo HTC tablet that I'm sure he'll be playing with!