I'm so late doing this weekly review, but life has been busy for us.

As usual, we had co-op on Monday.  It was a busy day for me.  Usually, I don't do much at co-op besides run around taking pictures.  And I usually do a little lesson planning too.  Not last Monday!  One of the teachers had to leave for a little while, so her class was basically cancelled and a couple of families were absent.  So that left me to fill in the gaps.  I didn't mind at all.  In fact, that's one reason I don't teach.  It's always good to have a back-up person.

Tuesday and Wednesday were reasonably productive days.  We are learning more about Rome and have grown accustomed to all the reading.  My mouth doesn't dry out as quickly and I'm pretty sure I'm gaining muscle mass around my mouth!  We haven't started reading The Bronze Bow yet, but I certainly hope to start this week.

We had a field trip on Thursday to the theatre to see a production of Lewis and Clark with our co-op. 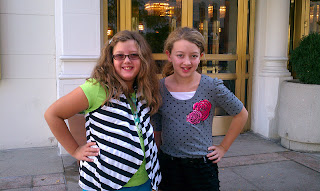 We expected it to be an actual play with many actors.  But, it was just one guy who narrated the account of Lewis and Clark.  He was an older, energetic man who delivered some humor into his narration, and used props, including children from the audience, to tell the story.  Two kids from our group were called up and spent most of the time up on stage.  Afterwards, we went to lunch with the grandparents since we were sort of in their neck of the woods.  Ordinarily, I would have packed a lunch but I knew my in-laws would enjoy having lunch out with us and there was an Uno's Pizzeria right next door to the theatre.

Friday was a slow day for us.  We accomplished what we needed to but I sure didn't feel too motivated to do much.  For some reason, I get like that after field trips.  I'm thinking that we should save field trips for Fridays, when possible.  Unfortunately, many of the school days at theatres and other places are not on Fridays.  Anyway, I somehow managed to meander along enough to be satisfied when we finished.

I'll back up a little to explain why writing this review was delayed.  We got some bad news late Wednesday night that my brother's mother-in-law passed away.  She was diagnosed with Parkinson's about 12 years ago and recently went downhill fast.  She was only 66 years old.  My sister-in-law doesn't have much family and was close to her mom.  She is just so sad and I'm sad for her.  The worst part was seeing my nieces and nephews so upset at the funeral on Saturday, having lost a grandma.  It was just awful.

Anyway, the lack of having family and friends close by left our family with making food to take over to my brother's house where everyone would gather after the funeral.  I was up until 3am Saturday morning making lasagna, chicken noodle soup, and cookies.  I would have had it done by midnight (or sooner) had I been more motivated on Friday and had I not gone shopping for something to wear to the funeral.  I'm embarrassed to admit that I literally had no nice pants or skirts/dresses that fit me!  None!  I gained about 15 pounds since we went to California in the spring.  Yep, a whopping 15 pounds!  That's horrible!  And what a slap in the face.  I bought one pair of pants and a pair of jeans.  I REFUSE to buy more at this size.  This is where being stubborn is a good thing!  So, please pray for me to take this 15 pounds off (and then some) so that I can feel better about myself and be healthier.

Saturday was the funeral and we spent the entire afternoon at my brother's house.  The kids enjoyed playing with their cousins.  My brother and his wife were totally wiped out but still had visitors when we left.

We had a very moving service at church this morning.  A mother of two young girls (5 & 3) sat with our pastor and told her testimony about the death of her husband.  He was only 33 when he died one year ago.  She talked about her grieving process and how much she clung to God through it.  It was such an amazing testimony of God's love and His hand on our lives.  No one knows why he died.  No heart failure, no stroke, no medical explanation.  I believe God was just ready for him, for whatever reason He had.  I know, without a doubt, that God will use her testimony to help others.  And I pray that those who heard it this morning will not forget it and that they will grow closer to God because of it.  And I pray that my brother and sister-in-law will cling to God during their time of loss as well.

After church, we came home to a somewhat messy house.  Knowing that my in-laws were coming over, we all pitched in and quickly cleaned up.  Not my favorite thing to do on a Sunday, but it had to be done.  My house is more neglected during the school year.  I wonder why???  We try to keep up with it and it's better than it used to be.  But it will never be perfect, nor would I want it to be.  One day, I might make a sign for our house that is like this one... 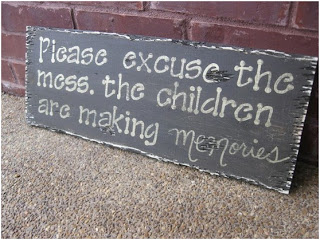 The only thing I might change is to say that "the family is making memories!"﻿
And now, we are off to start another week.  I am filling in for a teacher at co-op for the next two Mondays, teaching a lesson about muscles.  I hope I do as good a job as the regular teacher!  She's so great and makes the class so much fun.  With God's help, I'll do the best I can.
In case you missed it, read about how I was the best mom ever and get a recipe for Baked Cinnamon Donuts!  (I'd love to give credit to the site where I found this recipe, but I have no clue where I found it!)

Linked with Weekly Wrap-Up and

MFW Highlights
Posted by Lisa at 12:35 AM