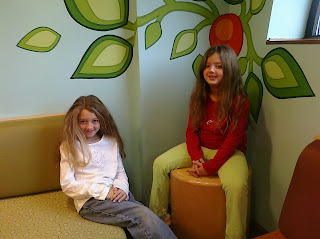 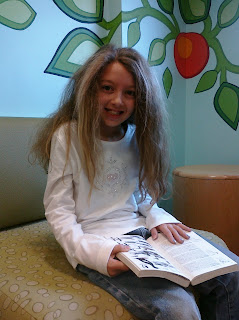 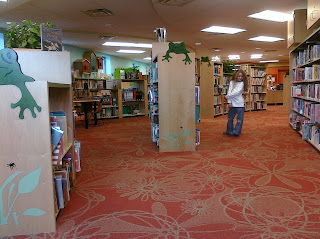 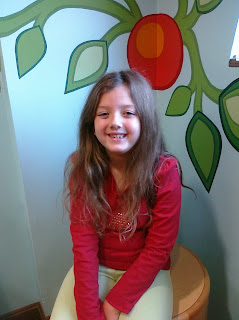 Email ThisBlogThis!Share to TwitterShare to FacebookShare to Pinterest
Labels: Library

After spending one week in South America, we are taking a week off school for Thanksgiving week.  Oh, don't worry.  There will still be plenty of learning going on.  Plenty of measuring in the kitchen as we practice home economics, geography as we travel, reading & writing as we look through the black Friday ads and make our shopping lists!  Loads of fun is in store for next week!!!

So, I wish everyone a Blessed Thanksgiving!
Posted by Lisa at 9:16 PM No comments:

Do potatoes grow indoors?  I'd love to attempt this science experiment but don't want to bother with the mess if they won't grow inside.
Posted by Lisa at 4:53 PM 2 comments:

We have left Canada and entered Brazil.  But I wanted to take a few moments to highlight some of our Canadian adventure.  Until our recent studies, I never desired to visit Canada.  Now, I think it would be really neat to see the Inuits that I grew up to know as Eskimos.  And to see the Northern Lights would just be phenomenal!  We learned that the Aurora Borealis shows a display at least once a week, which is quite often, but the Canadians never tire of seeing it.  They say it's never the same, so it's always amazing.

We made soap sculptures similar to how the Inuits carve into soapstone, which is how many of them make a living.

And some of them really do live in igloos! So, we made our own igloos from sugar cubes. I got to the igloo a little late with my camera and it was already falling apart by the time I snapped the picture! Nonetheless, they were fun to make!

We found many great books at the library on Canada - some we read, others we looked through.  I think I had about 100 books checked out at one point (for both kids)!

At the end of our last week in Canada (Friday night), we popped some popcorn, nestled under blankets on the couch and had a girl movie night while Daddy worked.  We watched Anne of Green Gables since it was made in Canada on Prince Edward Island.  I wasn't sure how my girls would like it, but they both loved it.  I even overheard my youngest talking to her friend about it the next day!  The book would have been a great read, but it's quite long and too much for either of my girls.  I did check it out anyway, hoping to read it myself, and to show them that the movie was made from the book.  Yes, I admit, I've never read this book!  Add it to the list of books I've never read but always wanted to!

One other fascination with Canada was Niagra Falls.  Emily really wants to go there now.  What a fun trip that would be!

Even though Canada wasn't quite as "festive" as Mexico, I think we learned more on this trip because we didn't know as much about the people, provinces, and territories; and we had fun doing it!

We are using this curriculum with our youngest daughter (age 6).  We waited until the end of our last school year to start her in K because she wasn't quite ready until then.  We are starting week 12 this week and we're working on phonics.  My question is, should I make flash cards/ring cards with the words she's learning on the workbook pages each week?  Some of them are names, are the rest of them site words?

She really wants to learn how to read, but can't learn it all at once!  She gets frustrated with phonics at times, so I don't want to push to the point where she'll hate to read.  I have a big book of Dick and Jane stories.  Any thoughts on using this with our curriculum?

When we read, I move my finger along the words and sometimes she tries to say some of the words and other times she asks me to stop doing that so that she can just look at the pictures.  Does anyone have any insight to offer?  At this point, should I be teaching her site words or wait until we get to first grade?  Should I just stick with the curriculum or add the to it???
Posted by Lisa at 9:57 PM 3 comments: 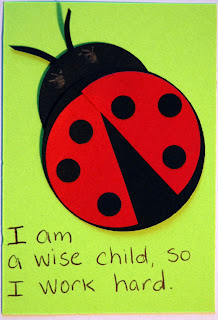 Katie's current letter is I/i so she made an insect badge - a ladybug, to be specific.  I was excited to use some of my stamping/scrapbooking supplies that are collecting dust right now from lack of use!  Anyway, she used a large circle punch to punch out a black circle.  Then used a slightly smaller circle punch to punch out a red circle, which I helped her cut in half.  She glued the two red circle halves onto the black circle to look like opened wings.  Then, she punched small black circles to place on the ladybug.  She drew eyes (which even have eyelashes!) and I helped her cut out antennas and then she glued the whole thing onto "grass" (a green piece of cardstock).  I wrote the lesson phrase on the green paper.  It turned out so cute!

We collected some colorful fall leaves on our Science Nature Walk a couple weeks ago that came from many different types of trees.  We placed them between wax paper, put them in large books, and left them alone.  At the time, I really didn't know what we would do with them, other than stick them in our nature notebook.

So today, we read a book about Canada that had some neat project suggestions.  One was to make a suncatcher with dried leaves pressed between wax paper.  Ding-ding-ding!!!  The bell rang in my head, alerting me to use the leaves we collected from our nature walk!  So, we pulled them out of the books, and voila...we now have gorgeous suncatchers!  (Had we kept solely with the Canadian project, we would have only used maple leaves, but the others were too pretty not to use!)

Here is Emily placing her leaves just the way she wants them. 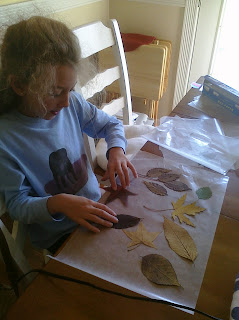 And we're pressing with a hot iron. 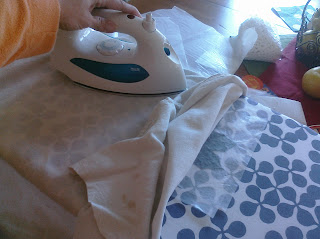 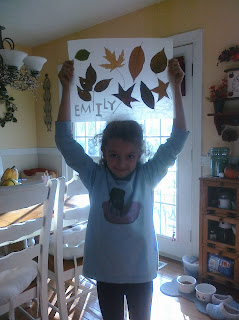 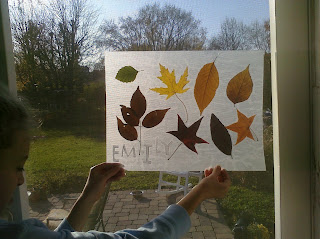 The only thing left to do is attach a hanger to it.  I'm thinking of having her put brads on each of the top corners and attach a string to them so that we hang it on the window with a suction cup.  Although she's think about using her piece of art as a placemat instead.  Hummm.....
Posted by Lisa at 3:59 PM No comments: