The girls finally got to make their wigwams.  We followed the directions in the MFW teacher manual and they came out so realistic.  They used cut-up cereal boxes for the frame and brown construction paper for the "shingles."  After gluing on the shingles, we covered the entire outside with white glue.  When they dried the girls cut smoke holes in the top.  They looked and felt much like real bark and are very sturdy. 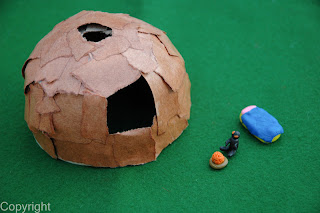 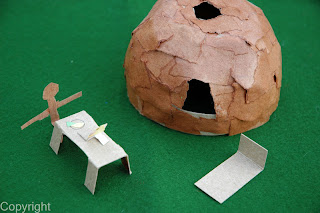 Both of the girls added their own accessories.  Emily made hers from clay and Katie used cardboard and paper.  Very creative! 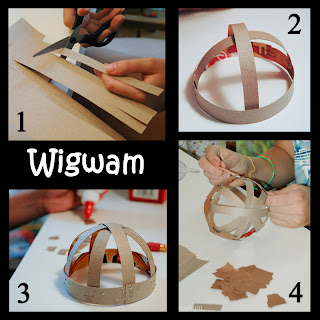 Squanto, Friend of the Pilgrims really touched Katie's heart.  Many nights, she wanted me to keep reading so she could hear what happened next.  She was very about Squanto's family dying before he finally returned to his village.  But she perked up when she learned that Squanto really helped the Pilgrims and considered them his new family.  We all had a great discussion about how Squanto's life was in God's hands.  Had it not been for the English keeping him as a slave and his inability to return to America, Squanto would most likely have died with the rest of his tribe long before the Pilgrims landed on American soil.  Furthermore, Squanto shows us that people of diverse backgrounds can live in peace and harmony and can teach one another many useful things, even how to plant corn and catch fish!

Almost Home is another great book based on the lives of those who journeyed across the Atlantic on the Mayflower.  I particularly love how well the story captures living history in great detail.  And the glossary in the back is helpful for some period terms that we didn't know.  You may know what a coif is, but do you know what a trencher is?  Hmmm...

To say that Emily doesn't like English is an understatement!  It's not my strong suit either.  I scored well in English when I was in school, but I remember very little of it.  I'm not the most versed writer and I don't have a broad vocabulary, but that doesn't stop me from writing or talking.  Much is learned by just reading.  Even so, I realize that there are requirements to meet and certain things should be learned, even when they seem boring and useless.  So, we carry on grudgingly, trying to learn each step of the way.  And I'm right there alongside Emily, learning with her.

In science, we learned more about mammals.  We covered monkeys, apes, elephants, leopards, whales, and other mammals similar to all those.  We learned about various ways that people tried to support the theory of evolution and that all have been disproved.  I'm thinking that field trip to the zoo is in order soon. :)

We took Thursday off.  My ladies Bible study started this week, which meets on Thursday mornings.  Typically, I would require the kids to do school work during that time.  But we've been working so hard and were a little ahead, so I was going to just let them play.  It turned out, a lady at church needed help organizing toys in one of the children's rooms, so the girls spent most of their time doing that.  We socialized afterwards and ran a couple of errands, so we didn't get home until about 3:00.  On most Thursday afternoons we will do some school work, unless we go on a field trip or need to run errands.  Our leader asked if Emily could help out with the little kids during Bible study, starting next week, and wants to pay her!  I told her I'm fine with it and I think it will be good for her. 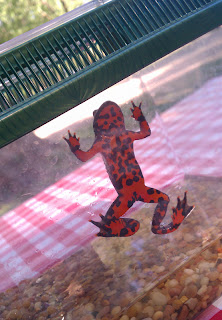 We had a bit of excitement on Friday.  I woke up super early - 6:00 AM, which is way early for me!  I'm a night owl, not a morning dove.  I watched a movie and dozed off for about an hour after.  so we were just getting started on school around 10:30 or so.  That's about the time when Katie said "why is the lid off Spotty's tank?" (Spotty is our firebelly toad.)  I thought she was joking until I looked over and saw the lid sitting on the table.  I asked her if the frog was inside.  She looked and frantically said "no" and began crying hysterically.  I added fresh water to the tank the night before and forgot to put the lid back on!  Oops!!!  My stomach started turning.  It's amazing how huge our house seemed at that moment!  I looked in every corner of the kitchen/dining area first, since that's where Spotty's tank is.  No luck.  We got a flashlight and started looking under all the furniture in the living room. We found other things, but not the frog.  Katie was still crying so I stopped, put my hands on her shoulders, told her to calm down, and said "let's pray."  In less than five minutes, the frog was spotted in the kitchen!    It truly was a miracle!  We all took a moment to give thanks to God for allowing us to find Spotty so quickly.  Hallelujah!

Linked up with Weekly Wrap-Up
Posted by Lisa at 8:54 PM