Our second week of school went much more smoothly than the first.  We still had some small bumps in the road, but nothing we weren't able to easily get over.

Since it's Sunday and our third week is about to begin, I'll just mention a few highlights.

In science, several unusual animals were mentioned in the book and Emily decided she wanted to write about a couple of them.  She found some pictures and information on the internet and put together a nice, brief report.  Forgive the quality of these pictures. They were taken quickly with my phone, but you get the idea. 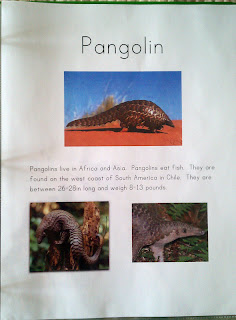 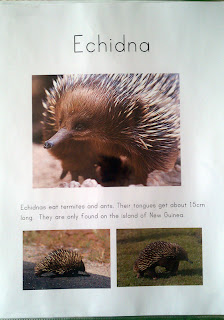 Friday was half a school day because I was busy making and decorating a cake for my niece & nephew for their birthday party.  This worked out well though because we had enough cake batter and icing leftover for a small world cake.  The girls did most of the decorating themselves and I think they did an awesome job!  Since it was a small cake, we only included the part of the world we are currently studying. 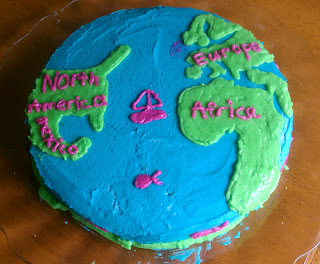 We are moving along nicely in all subjects we've started and will begin a heavier focus on math and writing this week. We will also begin God and the History of Art.

Linked up with Weekly Wrap-up
Posted by Lisa at 12:02 AM