Sweet victory!  I never feel like our school year is complete until we get our assessment.  After having to reschedule a few times, we were finally able to go today.  It's always a great experience.  Our assessor always has great ideas to implement during the next year and she always provides a nice certificate for each child.  We put these certificates in sheet protectors and place them in a binder for each child.

We had a great school year.  Emily needs to work on her handwriting, and I now have some ideas that should help with that.  It's a bit sloppy but I believe that's because she doesn't hold her pencil correctly.  Not that I think there's only one way to hold a pencil, but her way makes it very difficult to control the pencil.  I tried working on that last year but we both became frustrated and I gave up.

Katie still needs to finish her 1st grade workbook, so we'll be working on that some this summer and maybe into the fall.  But that's no biggie.

Overall, I'm very pleased with our year and look forward to the next. :)

Tales from the Crypt - Part 2

Remember Creepy Cat?  If not, read Tales from the Crypt (part 1) to refresh your memory.
Well, it turns out that the cat wasn't out to seek revenge after all.  Today, crawling out from under our porch were four little kittens!  The cat had been watching our house like a hawk because she birthed kittens under our porch!  Those poor little things wouldn't have stood a chance wondering out on their own like that.  So we found a good home for them and gave them away.
At least now we know that we were not being watched!
Posted by Lisa at 12:02 AM 3 comments:

We spent most of the week in Toledo, OH for Gymnastics Nationals.  Emily was nervous but performed very well.  She was disappointed that she didn't place in any event (unless you count the tie on beam), but she was pleased to know that her scores pushed her up to the next level.  I'm very proud of her for doing her best and just enjoying it.

We got there late on Tuesday.  Wednesday was opening ceremonies, held at the baseball stadium.

This was the day that was absolutely crazy.  It was a bit disorganized and storms came and went all day.  The gymnasts were announced as they walked around the field and they got to go out in the grass to try to break a world record for the most people to hold a handstand simultaneously for 15 seconds.  They didn't break it.  The record still stands at 399!


There was a street fair set up for the gymnasts which would have been a lot more fun if it hadn't rained.  They had a bunch of blow-ups out there that the girls did get to enjoy a little bit in between showers.  I didn't get many pictures because we were constantly on the move.  It was NOT my best day.  Getting wet from rain in an extremely crowded place is just not something I enjoy.  I can't even put into words how anxious I felt all day.  I could not relax and couldn't wait to leave.  Everything irritated me.  Everything!

We finally got something to eat at the stadium and sat down to watch them game.  And I use the term "watch" loosely.  Most of us were not actually watching the game.  The gymnasts were just having fun being with each other.


Thursday was the day of the competition.  This was a great day.  I was more rested, more relaxed, and didn't feel irritated at all.  The volunteers did a great job preparing for the meet.  We could see and hear well from our seats and it was just fun being there.

Emily's handstand during her floor routine.


There were 4 gyms set up inside the great hall at the convention center!

And I couldn't leave Katie out...
She now has big plans to be the team mascot!

We experienced some trouble with the brakes on our camper on the way there, so we had them checked out before leaving Friday afternoon.  Well.... one of the wheel bearings was completely destroyed!  The mechanic said we were lucky that the wheel didn't fly off on the road!  I can only imagine all the damage that would have caused.  That kind of "luck" can only come from God!  And the blessing is that they didn't overcharge us to fix it.  Were were in a pickle and they could have charged whatever they wanted.  But they were honest and fair.  I'm so thankful for good, honest people.

The repair took three hours.  The kids and I (and the dog) waited in the truck the entire time!  Katie played her DS while Emily and I played Uno.  Jason mostly paced outside until they gave him the bill.  Then he was relieved and was able to relax.

Now, we are home and hope to have a relaxing weekend.  Let's see if that happens!

Linked up with Weekly Wrap-Up
Posted by Lisa at 2:40 AM 1 comment:

My blog posts are so spuratic lately.  Our summer actually began toward the end of May when we went to California.  We spent just over two weeks there and returned on June 5.  The next day is wen work began in Emily's room.  We painted, installed a wood floor, and we are still working on the baseboards.  This is what we've spent most of our spare time on during the last two weeks, which we really haven't had a whole lot of spare time since we have had a number of other things going on.

A gymnastics meet will consume this coming week and we're getting new siding the following week.  Shew!  That's a lot of stuff!  Hopefully, after the siding, we can relax and enjoy the rest of our summer.

We purchased season passes to our local amusement park last September.  We got them for only $49 each, which was an increcible deal.  We have yet to go and I'm dying to!  They have a water park there too, so there's a variety of things to do, not all roller coasters (which Emily only likes a few).

We returned home about 10 days ago and I finally was able to complete my California blog posts.  It was a great trip and I hope you enjoy reading about it!

To the right of my latest blog post is my latest poll on house colors.  We have a cap code style home and we're deciding on a new exterior color.  The siding on it now is old aluminum that is dented, bent, discolored, and just plain ugly.  Here's a picture of our house now... 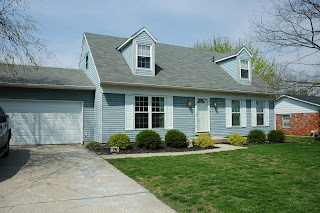 We are also tossing around the possibility of adding a porch all the way across the front of the house.  It would have white railing and posts.  Not sure about the shutters and front door color yet.

No, I'm not talking about a science experiment here.

Emily got new bedding for her room, along with pillows, window treatments and a cute netted canopy.  I purchased it from a friend and it's like new and too cute!  The new colors in the comfortor led to a new wall color: true turquoise.  It's a beautiful color!

I began painting on Monday and finished on Tuesday.  At first, I was careful to cut in nicely along the woodwork, then I realized how beat up and over-painted the woodwork was and decided that we would replace it.  Then, every time I got close to the floor, I realized how aweful that drabby old carpet was, and I found myself in search of a carpet knife.  Yes!  I cut the carpet in pieces, rolled it and hauled it out to the trash!  Poor hubs had no idea what can of worms I opened!... until he called.   Don't worry, I didn't get in trouble, because we have been wanting to remove that carpet ever since we moved in this house six years ago!

We shopped several places for a new floor and decided to match the existing hardwood in our house.  We installed hardwood in our kitchen/dining room, hallway & foyer a few years ago and Home Depot still sells the exact same floor.  So, hubs left the truck with me on Thursday and that's where I went.

The installation began Friday and was finished by evening on Saturday.  That's not so bad.  My dad was a huge help.  I would have had to work a lot harder had it not been for him!

The wood is all down now and it looks fantastic.  I'm not showing pictures just yet though because the room isn't completely finished.  We still have to get new baseboards and then put the furniture back in.  We are all anxious for it to be completed, especially Emily.

So tonight, Katie tells me that she'll let me take a week off before starting on her room!  Ha-ha... you gotta love kids!  Her room is next, I'm just not sure how soon I'll do it!  It just needs painted right now, so it won't be as involved.... unless I open another can of worms!

Tales from the Crypt

We returned from our 2-week trip to California on Sunday and found the carcass of a dead cat in our back yard!  There was nothing left to its head and ribs but a skull and bones.  The rear of the cat and its legs still had black fur on them.  It was disgusting and smelled horrible.

Hubs disposed of it and we moved on.  The next morning, on Monday, I opened the curtains in our classroom that faces the street, and there was a cat sitting in our front yard staring at our house!  It then starting to stare at me.  When I told the kids about it, they opened the curtains in the living room, and it then stared at them!  Emily opened the door and shewed it off, but it kept looking back at us as if it was thinking "what have you done with my buddy?"  Creepy!!!

Later Monday evening, the cat was back!  This time, it lied in the street, staring at our house.  Then, it slowly paced, eventually strolling up the neighbor's driveway across the street.  That's where it then cozied itself at the top of their driveway, and again, stared us down.  Ok, now this is getting really creepy!  At least it was evening and we would soon close all curtains and doors and go to bed.

We didn't see the cat all day on Tuesday.  I had been removing the carpet in Emily's room and had to take a break to go to a Relay meeting at the park from 6:00-8:00.  When we got home, Hubs and I both finished removing the carpet and hulled it out to the curb for garbage pick-up tomorrow morning.  All of the sudden, the cat was back!  And it camped itself on our front porch!!!

Is this really happening?  Does this cat sense that something bad happened to it's friend?  Is it holding it against us?  It's just plain creepy!!!