Weekly Wrap-Up: When Quitting is Not Giving Up! 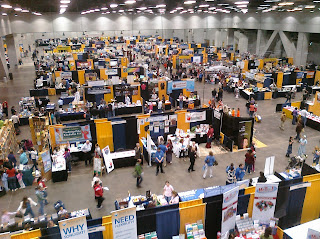 This past week went super fast.  We had a short school week due to the homeschool convention held Thursday through Saturday.  I went every day and had a great time.  In the past, I spent the majority of my convention time browsing the exhibit hall.  This year, I went to several workshops, a Tim Hawkins concert, and a two-hour finale with the Duggar family!

My family was with me during part of it and I have to say, I don't think I'll invite them to another homeschool convention!  At least not for a while.  The kids were tired after about an hour.  Hubs thoroughly enjoyed Tim Hawkins, and was fascinated with all the vendors and all the people, the THOUSANDS!!! of homeschoolers!  There were well over 10,000 in attendance!  Amazing!  But, just like the kids, he was done after about an hour or so.  He was thankful that a friend of mine was there and offered me a ride home so that he and the kids could go on home.  It worked out well. 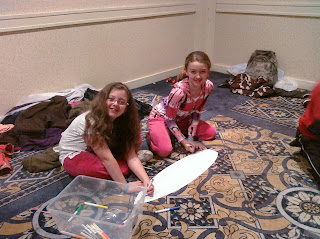 Meeting some of the Duggar kids and listening to Jim Bob and Michelle speak was amazing!  They are a genuinely kind and humble family.  I was amazed with their graciousness.  Here is the one and only picture I took of one of the girls... 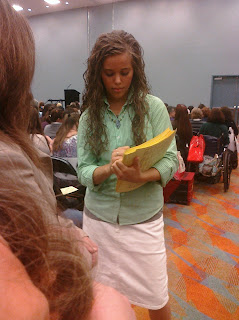 Yes, I could have asked someone to take my picture with her, or with any of the others.  But, I'm not one to impose and many others were asking for autographs and pictures.  I'm not an autograph collector at all.  I try not to place anyone on a pedestal and don't feel the need to have an autograph.  I wouldn't have minded a picture, but I'm ok without one too. :)  They distributed a family picture to everyone and I was satisfied with that.
I attended an IEW (Institute for Excellence in Writing) workshop and am impressed with the program.  I haven't purchased it... yet.  I'm considering it, but I want to read more about it and get reviews on it.  Some say it's time consuming and takes a lot of prep work on the teacher's part.  Something to consider.
Of course, there's always lots of curriculum to get a homeschooler's heart thumping!  But, I'm sticking with My Father's World because I love it!  I'm sticking with RightStart math because I love it, too!  I may change Katie's a bit, just because she's not as much as a manipulative girls as Emily.  She just wants to do it and get it done without fussing with manipulatives, most of the time. 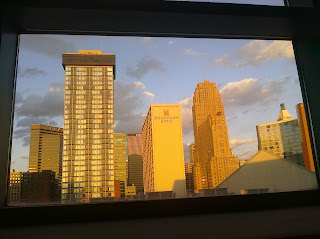 View of some building in Cincinnati from inside the Convention Center. 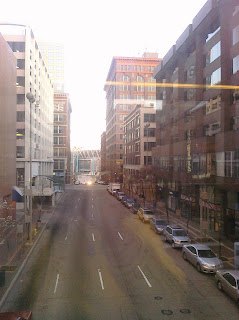 As far as schooling this week, I've decided to quit!  The Children's Homer, that is.  We're done.  I can't take any more.  Emily can't take any more.  She told me that she's tired of all the killing.  After speaking to many who have done or are working through this curriculum, I discovered that none of them read the entire book!  I don't like leaving things unfinished, but in this case, it's a good thing.  We tried it.  We gave it more than a fair chance.  I had to make myself realize that quitting the book doesn't mean I'm giving up.  In fact, it's just the opposite.  I'm actually opening the door to read-alouds that fit our family better.  And I'm utilizing our time in more productive ways.  That is definitely not giving up!  One thing my friend told me today is that you should always give a book 30 pages before deciding to put it down.  If you're not interested in it after that 30 pages, then it's best to put it down.
Does anyone have any suggestions for reluctant/struggling readers?  Practice, practice, practice, right?  Katie stumbles through the easiest of readers.  It's frustrating for both of us.  Should I try more flash cards?  Maybe I could make a memory game with word cards.  She likes memory card games.  And she likes to write.  I just hate that reading is such a chore for both of my kids.
I want to give a shout out to Jen at Scrapingirl for being so helpful to us this past week!  And to Lisa at thearmychapswife, I regret that we didn't meet at the convention.

Linked up with Weekly Wrap-Up and Homeschool Highlights
Posted by Lisa at 2:34 AM