Weekly Wrap-Up: Meandering Through the Week

We made it!  TGIF!!!  (This is something I rarely say and really mean today!)  I haven't felt well all week.  Between the cold I had and seasonal allergies, my head feels like it could explode.  But, I'm ever so grateful for Clariton-D!
Since I already wrote about the first part of our week in my post titled Too Much, I won't bore you with it again.  If you are so inclinced to read it, please do!  I did include pictures and a cute story about the lamb we sacrificed.
The rest of the week was business as usual.  We were able to finish weeks 19 & 20 in My Father's World, Creation to the Greeks, which was my goal for this week.  I'm incredibly thankful for that.  And, other than Tuesday, I didn't really feel like we rushed through it.  The Bible stories are so interesting (especially with the use of Squinkies) that it doesn't seem like we read extra.  The history of the Greeks, on the other hand, is a bit boring.  Learning about some myths and how the ancient history of Greece became known to us is interesting.  But it's nothing compared to Ancient Egypt.
Math was a bit of a challenge this week.  Katie is learning about trading and has been adding 4-digit numbers, using manipulatives.  She claims that she doesn't like the cards we're using.  They are called base-10 picture cards, and they teach students about trading.  My thought is that this was confusing to Katie in the beginning and seemed like too much work to lay out all the cards.  After today, I believe she's starting to understand it better and she didn't seem to mind using the cards as much.
Math was also a challenge for Emily.  I'm having a hard time getting her to show her work on paper.  She almost always has correct answers, so I know she knows what she's doing.  But I want to see her thought process on paper and she's having difficulty with that.  I guess she just needs more practice.

We finally moved out of Primary Language Lessons, and into Intermediate Language Lessons.  There's quite a difference in the material, in my opinion.  And I wish I had just started the second book much earlier this year.  Then again, timing is everything, and she probably wasn't ready for it earlier.  She still struggles some in reading and writing, so we take it slow.  This is only part of the beauty of homeschooling. :)

We started a project this week that involves an old picture frame, old screen, paint, eye hooks, and rope or chain.  I'll leave it at that for now and will write updates as we go.  Here are some pictures to get your imagination flowing... 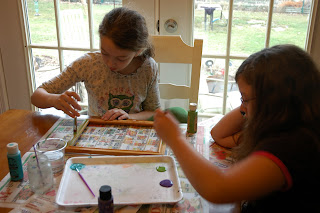 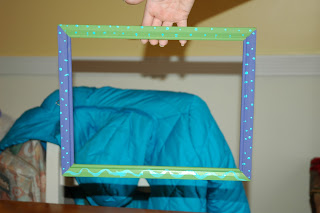 Linked from Weekly Wrap-up
Posted by Lisa at 6:10 PM