It was touch and go the entire trip.  We had a great time but dealt with illness every other day! 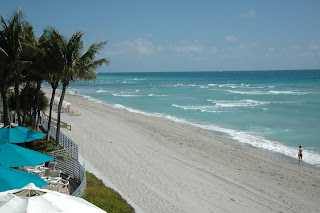 We arrived in Hollywood, FL (just north of Miami) on Sunday and Katie started puking at 3am that night.  She slept a good part of the day on Monday while my husband was working.  Emily and I sat on the balcony drooling over the beautiful Atlantic Ocean and the hotel pools below.  It truly was breathtaking and we were dying to step into the waters!  But poor little Katie was all tuckered out from all the puking and diarhea.  As I prayed for her health to return, I also prayed that no one else would come down with it.  We did end up walking down to the pool and out on the beach later that day, so it wasn't a total loss.

Tuesday was a good day.  We swam, collected shells on the beach, swam again, made sand castles, and swam again.  Don't worry, we had plenty of sunscreen and no burns!  We drove to Ft. Lauderdale just to check it out and had pizza for dinner.  Then, around 3am, I started with the puking and diarhea.  It went on non-stop for 6 hours!  I was miserable.  Thank goodness Jason didn't have any meetings Wednesday morning and was able to go to the store for some Pepto and ibuprofen.  I slept the majority of Wednesday while Jason took the kids to the pool.  They kept checking on me throughout the day and I was glad that they were able to still have fun.  I just wish I could have had fun with them!


Thursday wasn't too bad.  We drove to Miami and went on to Key Biscayne, which was definitely a highlight of the entire trip.  We drove into a state park there, which was a nice change of scenery.  The whole coast we saw from Ft. Lauderdale on down to Miami is so conjested with buildings, cars, and people.  Everywhere!  It was just nice to enter a state park with trees and plants.  I felt like I could breath pure oxygen there.  I still wasn't feeling great and took the bottle of Pepto with me.  I wanted to sleep on the way but the sights were too interesting! 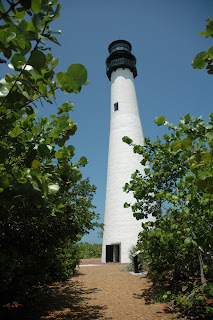 We discovered a lighthouse inside the state park that offered tours twice each day.  We happened to get there about 45 minutes before the next tour, so I was very excited.  I've never been inside a lighthouse; none of us have, until that day.  But as we sat under the canopy waiting for the tour to begin, I got hotter and weaker.  I still hadn't eaten much since the belly bug hit and I was very tired.  The tour guide came and we began walking.  Thankful to stop in the shade while he shared some history with us, I squated on the path to rest.  The squat eventually turned into a sit and that quickly turned into me laying on the path!  Yes, I was about to pass out.  Ears ringing and all!  The tour guide was ready to call 911, as were some of the others on the tour and some passers-by.  I pleaded with them not to, assuring them that I just needed a few minutes to cool down and rest.  I layed there for about 10 minutes, which seemed like an hour, and then got up slowly to continue the tour.  The tour guide was very kind and helpful and would not leave me for a second!  Cell reception was spotty in the park and he had a radio if needed.  I'm glad he didn't use it! 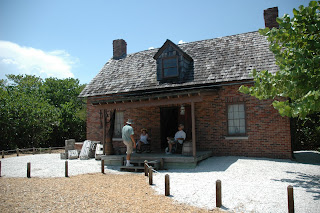 He walked us over to the lighthouse keeper's cottage where I sat in a rocker on the shaded porch and cooled down with the moderate breeze coming off the ocean.  There, the tour guide continued the historical account of the lighthouse and I heard an elderly woman comment that our kids were getting a better education right there than they would in school!  A proud moment for me for sure!  And my kids were very well behaved, so I was glowing inside!  After sitting there for a little while, we toured inside the three bedroom cottage, which housed a family of ten.  My kids were amazed! 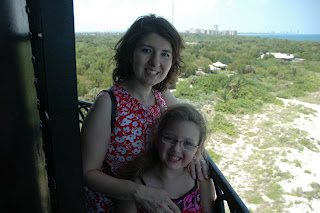 Eventually, we made our way up inside the lighthouse and I managed to take some pictures before coming back down.  It was a slow journey, but I made it and I'm glad we finished the tour even though I wasn't feeling well.  It was well worth seeing and I knew the chances of ever going back there were slim. 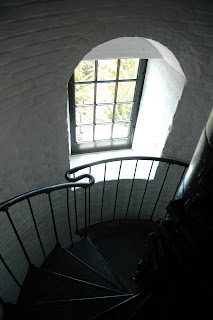 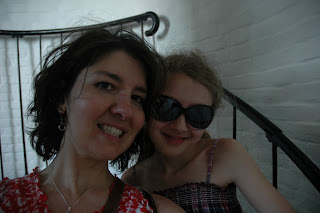 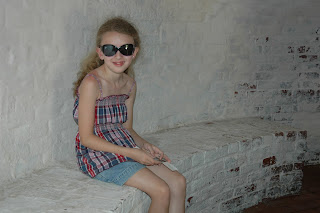 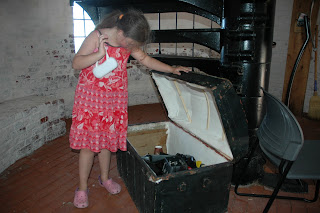 That night (Thursday), Emily started puking at 8:30pm.  At least we were back at the hotel and I'm glad she started earlier since we were leaving the next day.  I figured that if hers spanned the same time as Katie and me, she'd be done by 2am and we could still get some rest before packing up to go home.  She was done before 2am but the poor little thing did not sleep well until she was able to take some ibupfofen.  Hers wasn't quite as bad as Katie and no one had it worse than me.  What a blessing!  HA!!!

I packed up on Friday while my husband worked for a little bit.  We went down to the pool one last time.  Emily was exhausted but wanted to dip her feet in the pool before leaving.  We went for lunch and Emily actually ate half a grilled cheese sandwich and some chips.  I still didn't have a stomach for food and here she was eating a grilled cheese!  The journey through the airport was rough for Emily and I felt so sorry for her, especially knowing exactly how she felt - tired with a sour stomach.  By the time we got on the plane, she looked totally wiped out and slept almost the whole way home.

I was glad to get away but wish we had all been well for the trip.  At least it wasn't a kidney stone, like the the camping trip we took last month!
Posted by Lisa at 12:11 AM