Confessions of a Night Owl

All things considered, last week was good.  It started out a little rough for me due to some personal issues, some of which I wrote about in my previous post.

We have co-op on Mondays and for some crazy reason, I'm always tired on Tuesdays.  That seams so lame, doesn't it?  I have a terrible habit of staying up way too late.  I've always said that I'm a night owl striving to become a morning dove.  But honestly, I haven't done much striving lately!  In fact, I've completely rebelled against striving.  Maybe the time change will help. 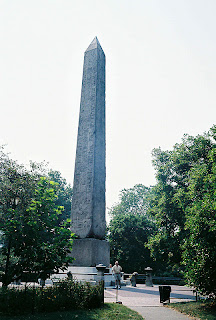 Despite my sleeping habits, we do learn each week.  And yes, I say we.  I had no idea that an ancient historical structure sits in Central Park New York.  No idea!  I feel like I've been deprived of important information.  I've never been to Central Park and I don't recall ever hearing or reading anything about this.  Ever!  One of the two ancient obelisks that once dressed the entrance to the tomb Cleopatra had built has been on display in Central Park since 1881.  I think I'm ready for a road trip!  Besides seeing this amazing piece of history, I would love to see the park itself, along with New York City and the World Trade Center Memorial.

So that was part of our history lesson this week.  I skimmed over parts of Augustus Caesar's World due to some of its content about gods and myths.  Other parts served as a brief recount of last year's studies.  For the most part, it was pretty easy, fun, and informative reading this week.
We still have some hoops to jump with Katie's reading.  When she reads, she attempts to sound out almost every word, letter by letter.  Any ideas on what I can do to help her with this?  We do the I read, we read, she reads thing and it works sometimes.  Other times, Katie gets frustrated and says "I just want to read it myself."  But I really do think that method helps her.

One very exciting thing is that we started a 30 Days of Thanks writing project.  We got the idea from Tina at Being Made New.  Not only are the girls thinking about things to be truly thankful for, but they are writing them down!!!  And they are not complaining about it!  In fact, they are excited about it!  When I get a chance, I will post pictures of their pages.

This week will be a busy one, but I'm determined to make it a good one.  My goal is to be asleep by midnight, if not earlier.